Matthew 15:21-28 “Lord, Son of David have mercy on me! My daughter is suffering terribly from demon-possession.”

There was a Canaanite women from the area where Jesus was. She had a daughter that was demon possessed. She had heard about Jesus and she came to him to ask for help. It is important to understand that the area Jesus was in was the area of Tyre and Sidon. This area was considered “pagan” territory. Sidon was the former home of Jezebel. The Canaanites had been enemies of Israel for years and their paganism had often led Israel into idolatry. They were despised by Israel. Israel referred to them as dogs.

So here is the scene. Jesus and His disciples were approached by a Canaanite women who was crying out for mercy for her child. At first Jesus did not even respond to her cry for mercy. The disciples took God’s lack of response as a lack of concern to help her. They urged Jesus to send her away.

END_OF_DOCUMENT_TOKEN_TO_BE_REPLACED

Lessons from the story of Samson

Samson – Lessons from the story of Samson Judges 14-16

Judges 13:5 There was a man named Monoah and he had a wife name Zorah. Zorah was sterile and childless. The angel of the Lord visited her and told her she was going to conceive and have a son. God gave her instructions concerning the son she would have. He told her that he is to be a Nazirite, set apart to God from birth, and he will begin the deliverance of Israel from the hands of the Philistines. 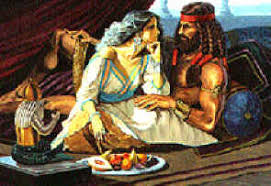 The name “Samson” means “of the sun”. He was the last of the major judges over Israel. The Philistines were ruling over Israel at the time of Samson’s birth. Samson was dedicated by his parents to be a lifelong Nazarite. A Nazarite was a person who was especially devoted to God. The Hebrew meaning of the word Nazarite means consecration, devotion, and separation. The Outward signs of a Nazarite was the growth of hair, abstinence from wine or other alcoholic products, the avoidance of contact with anything dead. Violation of these signs resulted in defilement and the need for purification so the vow could be completed. So often in this story we think that Samson’s long hair was where his strength came from. I think even Samson thought that was where his strength came from . However his strength did not come from his long hair, rather it came from the “Spirit of the Lord” who would take control of him to enable him to perform amazing feats of physical strength (Judges 14:6,19; 15:14; 16:28-29) Although Samson was a Nazarite he did not live a devoted or separated life. He was careless with his vow to God. He secretly disobeyed the prohibition of approaching a dead body (14:8-9) and had immoral relations with a Gaza harlot (16:1) and with Delilah (16:4-20)

END_OF_DOCUMENT_TOKEN_TO_BE_REPLACED

Why do you persecute ME?

Here is a phrase I should pay very close attention to. Saul was persecuting the church, he was having believers killed. He felt it was his duty to rid the earth of these people. This went on for some time. Saul later named Paul was very zealous about what he was doing. He felt he was doing all of this in the name of Jesus and that he was doing God a favor. He saw himself as better than these people. Little did he know.

Saul was persecuting, killing, doing his best to destroy as many believers as he could, all in the name of Jesus. He truly felt He was right about everything and that everyone else was wrong. But then one day on the road to Damascus he encountered the “True God!” It was an experience that rocked his world. As he was traveling her heard a voice say to him……”Saul, Saul why do you persecute ME?” Who are you , Lord?” Saul asked. “I am Jesus, whom you are persecuting, he replied. END_OF_DOCUMENT_TOKEN_TO_BE_REPLACED